on the art of being lost

I have spent much of my life being lost; metaphorically, as well as physically. I simply was not born with the tools that most people have to help them navigate a stationary life. I’m not sure if it was a product of the fact that the first twelve years of my life involved twenty eight physical moves, or the fact that my family had no connection to the typical grounding icons of childhood like church, community, and extended family. Whatever the reason, through most of my twenties and thirties, I have fought any effort to tether me. I have given away every GPS that has ever been given to me, I have never downloaded Google Maps, and I have refused to remain in the same house, state, or even country for an extended period of time.

I have lusted to wander, and wander I have.

That changed with children, of course. I tried to give them the idealized version of what I thought childhood should look like. I had made the decision that whatever my childhood included; I would do the exact opposite for my children. In retrospect, I wish I had been a little bit more forgiving about what was good, and only jettisoned the destructive. Being nomadic was not a negative. I simply perceived every childhood experience that way in the bitter early years of adulthood.

This trip to Italy was different. From the outset, I had a goal and a deadline, self imposed to be sure, but I had tightly scripted my itinerary to hit every last spot I needed for this novel. I even threw in Berlin at the end of it, because the last painting I haven’t seen is there. Even though I have traveled third world countries quite happily without a cell phone, or half the time without even a map, I headed into the birthplace of the Italian Renaissance with every navigational tool you can possibly imagine.

I now have a man who loves me, and worries about me while I am away. He does adorable things, like get me a global GPS system and programs all my museums, churches, residences and anything else I could possibly need into the memory. He has set the voice to “stern female British.”

I affectionately call her Margaret.

When I climbed in my little red fiat at the train station in Florence, there was also a built in navigational system. I named her Juliana. She didn’t speak any English, but her Italian is loud, sexy and passionate. Because I am now a responsible grown up, I started up both GPS systems before pulling in to the morning rush hour traffic. Margaret has been sipping too much sherry with her morning tea and she is definitely in her cups. She thinks I am in London, and tells me it is a twenty three hour drive with a channel. I find myself being shouted at by Juliana, but getting along with her surprisingly well, since we both know we are in Italy.

Margaret keeps trying to send me to Piccadilly. Juliana is cool with me going to Arezzo.

Until I decide to ignore my destination and head somewhere else entirely.

Such fireworks you have never heard. I know where I am going, and I turn towards San Gimignano. After a while of Juliana’s impassioned pleading, and Margaret’s strict and drunken admonishments, I simply shut them both off.

The bliss of quiet.

San Gimignano is a mostly pedestrian mediaeval town filled with towers and churches and cobblestone streets. You can wander with no destination, you can get lost in a church, and the best part is, because the car parks at the base of the really steep hilltop are severely limited, you almost have a real Italian experience. You could easily equate Florence and Venice to the new Disney ride that everyone has to get on. Three hour waits for a church or a museum are not uncommon. Sure, there were tourists in SG but there weren’t more tourists than Italians and that was a profoundly a good thing. I found a table in an empty café with completely indifferent food but a spectacular view. I spent the next three hours writing, wandered a bit, bought a linen shirt and then returned to my car to head to Arezzo. 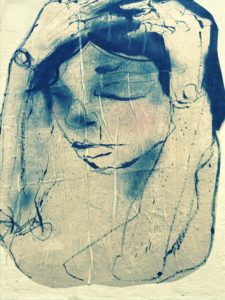 I turned on Margaret and Juliana to keep me company. I pulled out of the car park tipped on the bottom of a hill and when I closed the door a sprig of olive branch caught and showered me with olives.

Then I obliviously turned the wrong way. I headed uphill right into the tiny little piazza of the “pedestrians only” main street.

Margaret immediately sternly tells me to make a u-turn

Juliana is a little more forceful. 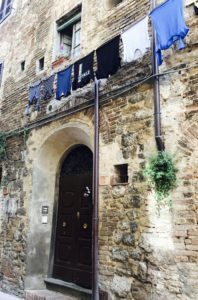 I can no more make a u-turn than I could make a Fiat perform a cartwheel. Laundry lines are brushing my windows, and I’m pretty sure I just broke the geranium pot at the side of the last house. Both of them are trying to make me head to the center of town where cars are strictly forbidden. I stop, shaking and sweating, and look all around me. The closest empty road heads down the hill, so I follow that, down, down, down, down and all of a sudden I am in the foundation of a Roman aqueduct water system. It’s completely isolated and desolate and a farmer in the olive grove stops to watch what I am going to do and how I am going to do it.

At the end of this road is a cliff with no room, no room whatsoever, to turn around.

Meanwhile Margaret and Juliana have both fallen silent. I think they sense the momentous nature of the next few minutes, and know that their lives depend on my vertigo. I can hear Margaret silently sip her tea laced with sherry, and I know Juliana is waiting for the next bottle of wine to be uncorked.

I put my head on the steering wheel, turn off the engine and just start to sob. I never cry when I’m travelling. This is what I love, the adventure, the unknown, the unmistakable thrill of the completely unexpected, but I cry like a little girl and all of a sudden it hits me like a ton of bricks.

It’s never happened before. I realize that I miss my Michael, his ridiculous brute strength and soft cuddly teddy bear heart. I miss my Holly with her beautiful soul and quick wit that makes me laugh so hard I am in danger of peeing in my pants. I miss my little cuddle pooky, Hadyn, who really doesn’t want to be a teenager and still pretends that she is little enough to sit in my lap. For the first time in my life, I’m that girl who has a home, and a family that loves her, and all the navigational systems in the world are not going to help me get back to them. I have a heart that beats outside my body. I have a place that I want to be more than I want to be somewhere I am not.

Of course, once we reach paved roads again Margaret and Juliana start chattering and giving me advice again.

I don’t need you girls, I say saucily and switch them both off.

There is a pull out on the side of the path. I stop the car, turn off the engine, and look around. I can do this, just like I have done a thousand times before without the benefit of GPS. I will get where I am supposed to be going, I always do. It might be next June, but I will get there. I swear to God I will.

There is a blacksmith forge to the right of the road. The door to the forge is open, and someone is inside. I go in and watch the young man pounding steel on equipment that has not changed for 1500 years. He is intent on his task, and I don’t interrupt, but just watch the iron take shape under his hammer. 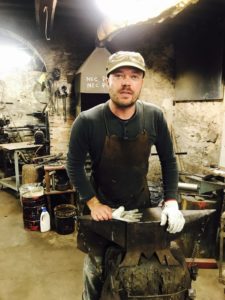 He must feel me watching him, because he turns.

I don’t ask him for directions, Instead, I ask him what he is making and how he makes it. His name is Alessandro, and he spends the next half hour showing me his work and all the different things he sells. Some are for tourists, some are commissions, and he has even been flown to Beverly Hills to make an iron railing for some movie star whose name I don’t recognize. He is everything I needed after having a door slammed on my face at the Uffizi. We pick out a metal and he forges Michael a present. He even puts an apron on me, and gives me a hammer to make a blow on the hot metal. The iron gives as I hit it. I watch it turn from fire red to cooling black and silver, strong and inviolable. 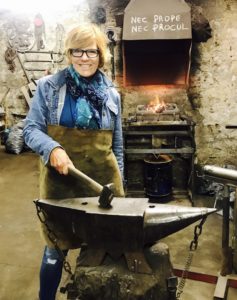 I wrap my present for Michael that I made with my own two hands, and say ciao to Alessandro  ( https://www.facebook.com/www.alessandrocoli.it/ ) kissing him on both cheeks the Italian way because he’s cute and I’m old enough to be his mother. I forget to ask for directions. I just get in my car and drive down the hill towards Sansepolcro, never making a false turn, just following my heart.

Margaret and Juliana were silent for the rest of the trip.

I am an intrepid world traveler. I can find my way home.