I fell in love with my Italian boyfriend when  I was twelve, and my mother and new stepfather sent me on a summer trip with Scholastic International. It was a six week tour of Europe intended for high school graduates before they left for college; my generation’s shortened equivalent of a gap year. The reading list to prepare for the academic portion of this trip was at least a hundred volumes long. It included such diverse works as “The Agony and the Ecstasy” by Irving Stone, and “Odysseus.” I read every one of them in the nine months before I left. Mornings would be spent with professors of the universities where we would be staying, or in lectures give by four travelling professors in Art, History, Architecture and Languages. This trip wasn’t supposed to be fun; it was supposed to be an intensive education on the Origins of Western Civilization. It was like the European Grand Tour but with all the sunbathing and good food taken out of it.

In the dark ages of the seventies you didn’t need a passport to travel to Mexico or Canada. This was my first real true overseas adventure. I still remember that first passport picture like it was yesterday. I was smiling, and the enormous teeth and cheeks I finally grew into much later, were really all you saw in that little tiny square of colored picture. I looked like a goof ball. Correction: I WAS a goof ball.

I was not prepared to be so much younger than everyone else. I should have been, but it simply didn’t occur to me that most of these kids would be seventeen or eighteen. That might as well be another generation when you are a teenager. For the first week at Cambridge, I was treated like the extreme oddity I was. By the time we had gotten to London, a few of them had gotten used to having an annoying kid sister tag along. While they still didn’t like it, it didn’t hurt that I had done all the reading and most of them hadn’t. They kept me close for the lectures and left me behind for the free time.

Then I met Jasper.

He was from Tennessee, had an exotic drawling accent, and was nineteen years old. He had dark curly hair, big brown eyes, elegantly long fingers, and a quixotic sense of humor. Rather than just tolerating me like the rest of the students, he seemed to truly enjoy my company. He had worked for two years to earn the trip for himself since he didn’t have a rich doctor dad to pay for it. He was truly present for every lesson and experience while he was there. He had bought this experience by filling up cars at his uncle’s garage and he was going to get every penny out of it.

He must have liked lost puppies, because I became his pet for the rest of the trip. The rest of the kids were thrilled that there was no proper drinking age in Europe, but Jasper was old enough to not care. So while everyone else was getting hammered, we would catch strange buses and go on impromptu tours to the corners of whatever city we happened to be in. He taught me how to salt melon and properly say ‘y’all’ on the first day. Later lessons included how to be a member of a social group without being completely awkward and it’s important corollary; snorting when you are laughing is not going to get you places. But by far the most important thing Jasper taught me during that magical summer was how to completely immerse one’s self in art.

He absolutely loved art. When he spoke about the painting you were looking at, the story became alive inside of you. You entered the world of the canvas or fresco and became a part of it. There was no separation between you and the masterpiece of imagination in front of you. I’ve never had anyone explain art the same way since; like stepping into a living breathing play written just for your benefit.

I really didn’t know how to relate to other kids. I was at least three years younger than my classmates entering high school. I hadn’t started my period. I hadn’t had a serious crush, and truth be told, I had never been kissed. I dressed like I just was released from a commune. I didn’t know yet that just because you knew big words, didn’t mean that you should use them in conversation.

I was a social disaster.

Jasper didn’t care. He thought I was adorable, like the little sister he never had, and for the rest of the trip I was always at his side. I was at his side when I first discovered Piero Della Francesco in London. When I saw my Italian boyfriend again at the Uffizi, and then when my love was cemented in Urbino. My trip was all wrapped up in Jasper, yet somehow my love affair with a five hundred year old Renaissance painter became the lightning rod for the rest of my life. A place I could always return to when things were bad. Jasper taught me how to fall in to the art you loved, and immerse yourself so that the outside world completely disappeared. He also taught me to chose which painters you loved carefully, because not everyone was worthy of such devotion. He taught me how to find the perfect viewing distance with the geometry of perspective. Most importantly, he taught me that great art was like a punch in the stomach or a breathed kiss on your neck.

Piero made me feel both, a love affair that has lasted my entire life, began that summer.

When I walked into the Ducal Palace piazza in Urbino this past week I had a wave of déjà vous so profound it felt like vertigo. I was having flashbacks so strongly in Urbino I kept stopping to get my bearings. Not of who I was; but when I was.  I was twelve years old again and holding Jasper’s hand. We were waiting to enter the palace. A wall with inlaid wood of a nymph, a window overlooking a parade ground, a darkened room with the Flagellation of Christ, a fireplace I climbed inside; I simultaneously existed with my five hundred year old lover, my twelve year old self and of course, Jasper. 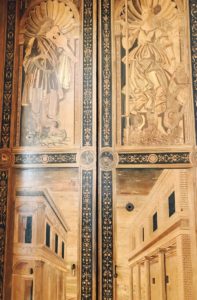 I lost touch with Jasper after college.  His last name was so extraordinarily ordinary, even modern day search tools are useless. I don’t remember what town in Tennessee he lived in, or where he went to school.

One summer, a long time ago, I had a hero. A hero that watched over me the way no one ever had up until that point, or rarely has since. A hero that delighted in teaching me everything he knew, without worrying about if he was still going to be the smartest guy in the room. I had a hero who gave me the greatest gift of all; the ability to lose myself in art and not remember when I am.