Most of you know that I have spent the last six months of this year trying to recapture Hadyn’s childhood. I started the restaurant when she was not yet three, I closed it when she was eleven, and pretty much everything in the middle was a blur. I missed her entire childhood in a red hot mess of exhaustion, stress and if I’m being brutally honest, far too much vodka and five hour energy drinks.

One minute she was a toddler watching Wow! Wow! Wubbzy! and letting me dress her in sparkly swirly skirts and put her hair in bows and ribbons; then I blinked, and she was a preteen who grew three inches in forty five days and had become decidedly opinionated about her personal style.  No more dresses, no more braids, no more bows and definitely no more glitter skirts. She now wears fedoras, funky socks, aviator sunglasses, Chuck Taylor high tops and a single piece of Mexican Fire opal, very specific and stylized but as far from sparkles as you can get.

The major impetus for me taking this year off was to re-do our lost decade. We never did any of the adventures I had with her older brother and sister. She didn’t know how to ski, ride horses or properly pack to travel. We had never seen fireworks together, taken a summer vacation, watched a space launch, been to Disney, or gone on a road trip. She could make a chocolate lava cake from the time she was three that would make you swoon but she had too few stamps in her passport and she certainly hadn’t been to any of the great chocolate shops and museums in the world. She still wanted me to tuck her in every night, but the number of days I had done so in a decade was far fewer than the nights I had shut down my bar with a bottle of Albarino.

Yet, she still had that precious wonderment at the utter joy of the world without yet hearing the stories in her head that could populate her future adult life. My big fear was that I didn’t have much longer before her internal narrative became one where she didn’t believe in a future filled with limitless possibilities. She would grow up and not believe that making a fairy house was a legitimate use of a Sunday afternoon or the quest to make a perfect waffle was not a worthy life goal. I was desperately afraid she would write a list of life plans (Holly did this at six) and it would not include “catch a leprechaun.”

I remember with complete clarity the first time I grasped that we all had an internal monologue continuously playing in our heads and that mine was warped. I had just finished reading the obligatory nihilist Nietzsche bullshit in college when the justification for an internal conversation went off like a light bulb. The stories we tell ourselves are to make believe that our lives are worthy or valuable. I realized that I had skipped the part where I told myself happy stories and mine were all about worthlessness and not being enough. Now that I was “all grown up” and a college freshman, I realized that my internal monologue of “I hate my life” was just my ego reacting to the meaninglessness of existence.  How depressing, I thought, just seventy more years to go.

The reality is that in my childhood it was appropriate to be afraid; constantly and vigilantly fearful of the very real boogeymen in my bedroom and my life. I had learned that lesson well. Simultaneously, I was taught that life was to be viewed from a perspective of scarcity: you are not enough to be loved by yourself alone. You will never be enough just as you are. You are damaged. I didn’t believe that life was a joyous miracle because it simply wasn’t. It was scary.

We either decide, consciously or not, to make our children’s lives the exact same or exact opposite of our own experience. If I got nothing else out of two decades of therapy, I learned that my childhood was neither normal, nor acceptable. I decided that when my first child was born I would do everything the exact opposite of what had happened to me. Since I thought I was not enough, then I would tell my children every day that they were complete and whole. Since I thought I was ugly, then I would tell my daughters that they were beautiful just the way they were no matter what. Since I lived my life in fear, then I would teach my girls that their possibilities were completely limitless and that they were always safe at home.

This past week my best friend and I were with Hadyn in the Yucatan. We went to visit Coba, one of the  Mayan pyramids. The weather was overcast and intermittently sheeting rain and Roberta was not feeling up to a long hike so we took a bicycle taxi over the three mile dirt trail. 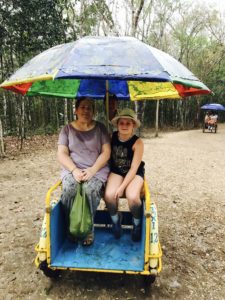 It was glorious. Hadyn and I climbed up on several altars and sac-be or raised road. 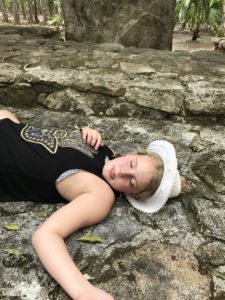 We counted iguanas and searched in vain for monkeys. 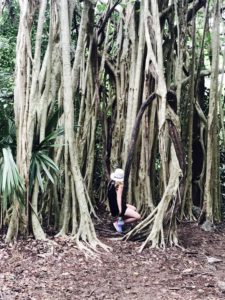 Our guide spoke little English, so I translated for the Hadyn and Roberta as we went deeper and deeper into the jungle. Our guide would put up a beach umbrella when it rained hard or we would pull under one of the huts and wait it out. After about two hours the sky gave up on allowing us to have our tour and opened up in earnest, drenching us just as we rounded the corner to the main pyramid. Our guide pulled up to the edge of the stone platform and asked us if we wanted to get off. “Demasiada lluvia, era buena,” (too much rain, we’re good) I said. Hadyn, not understanding a single word of that, jumped off my lap and scampered up the stone platform to the edge of the pyramid. I turned back to him to ask some questions. A minute or two later Roberta nudged my arm. “Look,” she pointed. 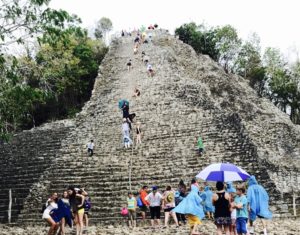 Hadyn was already one third of the way up to the top.

I jumped off the cart and ran across to the edge of the pyramid. If I called to her, she would turn around and fall to an inevitable death. If I let her continue to climb she would make it to the top and fall to her inevitable death on the way back down. It was sheeting rain, slippery, the steps were as narrow as six inches and had a rise of up to a foot and a half. If I just stood and watched her… she was almost half the way up.

I sucked in my breath and started to climb.

I climbed as hard and as fast as I could to catch up, and we reached the top at the exact same moment.

“Isn’t this amazing!” she was breathless and excited and completely joyous, running all over the top and looking over the edge. I was shaking, scared, and completely terrified of going back down the other way.

All of a sudden it dawned on me.

I had done an AMAZING job raising this kid. She just knew that she could climb up (and down) that deathtrap and be just fine. She knew that she could do literally ANYTHING she wanted to do, simply because she wanted to. We (her father and I) had both kept our own painful internal monologues from playing in an endless loop in her head. Maybe she would never have to look at her life in those terms. Maybe she would believe her life was filled with joy, simply because it was. 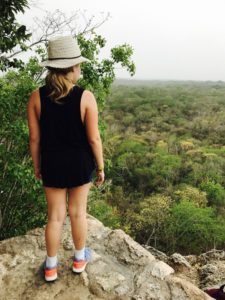 In my subsequent work with my happy life guru I have discovered that I am beginning to be able to change the stories that I am telling myself in my head, and by changing the stories I am transforming my reality. My internal monologue this morning as I wrote this story went something like this, “I’m so lucky that I learned how to be a really great mom from my mother.”

What stories do you tell yourself that you want to change? If you could rewrite your internal monologue, would you?

Tell me your story.

PrevPreviousthe happiness accelerator
Nextwhat you really should be eating and whyNext