fear is your friend 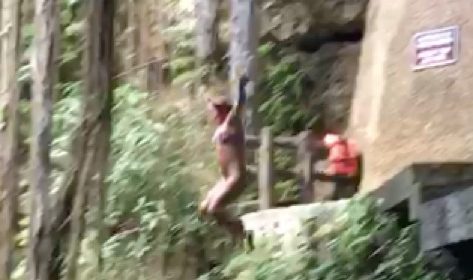 Fear is your friend

Last month, I was climbing down into a 100 foot deep cenote in the Yucatan. A cenote (z-no-te) is a water filled sinkhole and part of a connected underground river system. All rivers are underground in Mexico and when the limestone above collapses you have a cenote or ultimate swimming hole. 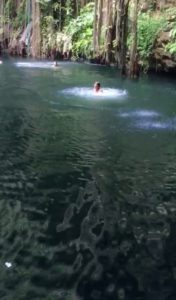 In the Mayan culture it was believed that cenotes were part of a sacred well with pathways to the afterlife. Light would fall on one cenote and refract through the underground streams to the next. It would appear as if the bottom were glowing in the nearby sacred cenote. The Mayan priests would then choose a volunteer as an offering to the gods. The volunteer would jump off the cliffs edge into the deep glowing water, believing it was a direct path to the afterlife. Unfortunately, 3000 years ago, these cenotes did not have the man made cement staircase to the bottom once they discovered their mistake.

I have always had dreams in which I am falling. Most times I might not even be fully asleep when I would begin falling into a black void and jerk myself, suddenly, awake. Other nightmares might come and go, but falling was always my favorite, hanging out just on the edge of sleep.

I watched the parade of twenty something’s jumping off the ledge about 30 feet above the water with abject terror. Admittedly, it was not the top, but it was still a really, really big jump.

These kids were filled with the arrogance of danger that only the young can truly possess. I, on the other hand, am a worst case scenarioist. I thought about how rescue workers were never going to be able to get the body up the stone pathway I had barely been able to get down. I fantasized about the helicopter lifting the body bag from the water on a long cable hovering and blocking the sun.

Then, all of a sudden, it occurred to me, no one was getting hurt. There were no blood spatters on the walls, no broken bodies waiting to be airlifted out the crevasse, no brains leaking out of their ears when they got out of the water. What’s more, they actually seemed to be having a great time. They weren’t thinking about all the bad things that could happen to them, they were actually living their life. Then it dawned on me right then and there that you can actually own your fear rather than your fear owning you.

And I climbed up to the top of the ledge and I jumped. 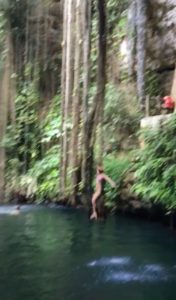 It was at that split second that this blog was conceived somehow in the very back part of my cerebral cortex where stuff like that is formed. It was at that minute when I was free falling into the black void of the bottomless water beneath me that I thought, 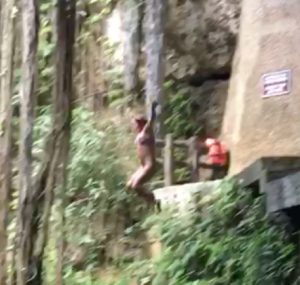 Maybe not particularly profound, but really, think about it, what if you didn’t allow your fears to control the direction of your life? What if you owned your fears and somehow confronted each one until they lost their power?

. I probably didn’t invent this (it is far too clever) but if you define the “run away from” fears as anything that will kill you. The rest of your fears are probably “run towards” fears that will make you grow or things you really need to do something with.

About the third time of jumping off the ledge, I realized what I was afraid of:

fear of discovering my purpose…

I was supposed to be “finding myself” on this trip to my spiritual home and “figuring out what I wanted to be” and what I was going to do next. All of a sudden it dawned on me, that all I was doing was spinning my wheels because I was stone cold terrified.  I was afraid that maybe I was not a good enough writer. I was afraid I had nothing to say. I was afraid that no one would want to read it. What if I found my divine purpose and I sucked at it? 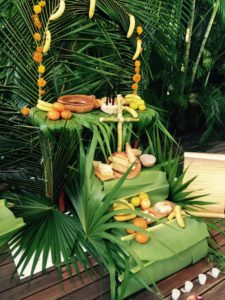 Worse yet, what if I failed.

And so here I am. Facing my own fear and making it my bitch. I might suck. I might be a terrible writer. I do have lousy grammar, an inability to conjugate verb tenses in any language (including English) and I was recently told that I REALLY needed to learn how to write.

But I am sure about one thing. I can teach each and every one of you that it is OK to feed yourself loving, nourishing, comforting food. In the process you can and you will heal yourself. I know for sure that #foodislove. It is OK to remake our messed up relationship with food and start over again by confronting our fear of loving food one baby step at a time.

So I am going to start my personal adventure of confronting my fear of failure of epic proportions. Get a piece of paper and draw a line down the center of the page. On one side write the “Saber Tooth Tiger” fears and on one side list the “Bunny with Fangs” fears.

Holly having a car accident

Being the only one naked in a room

Being alone in the house at night

On the surface it looks like you can’t do much about the Saber Tooth Tiger fears. That wouldn’t be strictly true, of course. I can make sure Holly wears her seat belt, doesn’t text while driving, drives a safe and reliable car (it’s a Subaru). I can make sure that I and my family eat an anti-inflammatory diet with loads of veggie antioxidants to deter major health concerns. I fight racism and bigotry; both the big battles and the small. We do the best we can about the big fears and we pray hard every day that the people we love make it home to us safely.

It’s the little fears that we can claim ownership of and by making them ‘ours’ we can change the quality of our lives. If I spent half the time studying grammar, as I do worrying about whether my neck is wobbling, I would have a PhD in Verb Conjugations by now. Indeed, I have also discovered recently that all the worrying in the world about whether my neck was wobbling has not made it any better.

So what does this have to do with food, you might wonder?

I posted on my feed, “what is your favorite comfort food and why does it make you happy?” A man answered that with the comment “food is fuel, not a comforting device.” We have been taught to fear the loving power of food and to somehow feel guilty if we enjoy it, or it has too many calories, or it is not the traditional version of what health food is supposed to be. He could not be more wrong or the sentiment more misguided. We have been taught to fear comforting ourselves and others with food since somehow this is a puritanical failure of epic proportions. We have been taught we need will power to control our food. We should be above eating our feelings or using food as a comfort when we are angry, lonely or sad, right?

But what if all the people that taught us we shouldn’t eat our feeling were wrong?