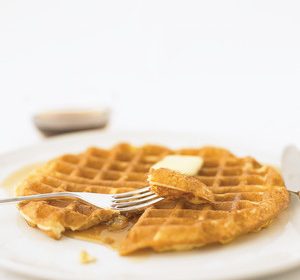 When my daughters were six and twelve we decided to get them a dog.

I’m not sure whose idea it was first, mine or Hadyn’s father, but we decided it would be a good way for them to adjust to our changing family structure since I had just moved in with Michael. Their father started watching the rescue websites for a little dog, and I simultaneously prepared Michael for the idea.

Me: I want to get a dog for the children.

Michael: I don’t want a dog.

Me: OK …then I would like to have another baby.

Me: I guess I will settle for the dog

Their father found a little rescue on a website for the Georgetown ASPCA. I raced over there to see the dog. Even though I didn’t come home with that dog, I wasn’t going to leave without a special someone. She sealed the deal by draping herself around me like a live stole and wagging her tail in my face. It was love at first wiggle. I named her Adele. 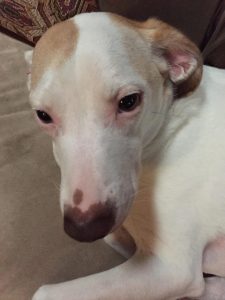 The only problem was that Michael and I were leaving the next morning for a ten day holiday. It was six weeks to Christmas and I devised the amazing plan of waiting to give them the dog until Christmas morning. My restaurant manager agreed to take the dog while we were away for the next ten days and I had a new collar made for her with my name and cell phone. She escaped from his yard at least once a day for the next ten days and I would get calls from his neighbors at all hours. It was a little disconcerting. Fortunately she was still safe and sound when I got back.

Their father and I created an elaborate ruse for exchanging children and hiding the dog several times a week. I would park my hippie van around the block, put the dog in, race back to the house, he would pull up, drop the kids off and race to the van to get the dog. It was winter so we didn’t have to worry about it being too warm, but she had separation anxiety and she would howl like a banshee the whole entire time. My six year old was an observant child and seemed to be very aware of the tennis balls and dog cookies that she was constantly finding under the furniture. She was also more than slightly miffed she kept missing my new friend who brought her new puppy over to play every time she was with her Dad.

Christmas morning FINALLY arrived and their Dad was going to arrive at 7:30am with dog in his car. My children were very well trained and would never get out of bed until he arrived. They also still slept in the same bed so I snuck into bed with them at 7am for the yearly, “did you see our stockings,” “did Santa come,” “are the cookies gone,” queries.

Eventually the bedroom door opened up a tiny crack and a little ball of white and brown fur rocketed onto the bed.

“SANTA CLAUS BROUGHT US A DOG!!!” shouted Holly. She didn’t skip a beat. That puppy brought me at least a few more years of Santa and the best Christmas ever. Adele has been a continuous source of joy ever since. (Except when she rolls in sewage)

Hadyn finally admitted to me last year that she had suspected I was the fat man for a while, but she hadn’t wanted to tell me because it would make me cry. I was a little surprised at the depth of understanding she had for my character but more surprised to discover that I wasn’t even slightly sad.

All I said was, “You know I got you the dog right?” 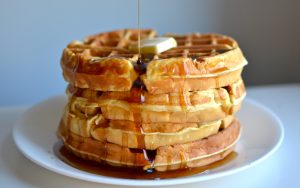 We always have waffle sandwiches for Christmas breakfast.

Preheat and prep waffle iron. Melt smart balance, add all other ingredients and stir. If not the texture of cake batter add seltzer water till more liquid. Do not over mix batter should be slightly lumpy. Pour in waffle maker to within a 3/4 inch of edges about 1/2 inch thick. Cook for longer than you would ordinarily and until surface of waffle is crispy to touch.

Optional: cut back on almond milk by using half seltzer water

Optional: Use any other type of milk than almond

Optional: leave out evaporated cane juice or switch to agave

Optional: Use instead of bread for sandwiches.

Heat waffle maker. Mix batter till just combined being careful not to over mix. Spray waffle maker with nonstick spray or wipe with canola oil or smart balance. Spread batter evenly to within 1 inch of edge, cover and cook until golden.