When Nicky was little, we lived in an old grey farm house on the path of one of George Washington’s marches. Or at least that is what I was told, and I preferred to believe it was true. The house had a cellar that dated back to the mid 1700’s. The rest of the rooms had been added on in a haphazard manner through the next two centuries, and the end result was a charming little cottage that was on a 10 degree slant with no straight lines and bordered on all sides by fields, farms and a wildlife refuge. Having no straight lines myself, I completely adored it at first sight.

I had moved out of the house his father and I shared two months previously, and had lived out of a suitcase on random couches while he was spending summer break with his dad. His father was bitter over the divorce and when Nick was with him I was not allowed to call or stop by the daycare his father had arranged. After a while, I realized there was no point sticking around Jersey for the summer. I had already put our possessions in storage until the move. I left Elliot, my enormous black lab, at a friend’s and hopped on a plane to Mexico for the remaining six weeks he was with his dad. This story is not about that trip of strange buses and towns chosen for no specific reason other than the quest for the perfect mole’. I landed in Mexico City and disappeared into the heart of Mexico that belongs to those of us that dream in Spanish. This is not that story, but do remind me to tell it to you some time; it is filled with dark eyed lovers, pyramids on the top of the world and the scent of jasmine trees. The story has layers like the chiles and chocolate and salt on your tongue at the end of a perfect meal.

On a Friday in late August, I landed dusty and culture shocked in LaGuardia. I took a cab to the friend’s house where I had left my dog and my car. I had a couple boxes of clothes, toys and kitchen equipment in the back of my Chevy station wagon, but the furniture, and beds wouldn’t be delivered till the movers came the following day. Nick would not be returned to me till Sunday night at 6pm.

The fields that surrounded the house belonged to a farmer named Skeeter. The corn was high, and the tomatoes big and red. The first evening at dusk, I roamed the up and down the rows touching the corn stalks and silk that cascaded into the path. The tomato leaves were sharp and pungent. I picked up some of the fallen red fruit and brushed the dirt from them. I ate them wandering up and down the rows, allowing the juice to run from my chin. Elliot stayed right at my side. He didn’t even chase the doves that we rustled from the ground. All of them were paired, and that made me happy, and sad at the same time. Elliot was tall for a lab, and my hand rested comfortably on his ruff as we walked. My world was entirely comprised of a three year old fat baby boy and a regal giant of a black dog.

After six weeks in Mexico, my brain still hummed in Spanish. I wasn’t quite sure how I felt about being back in this country yet. I had missed my son and dog desperately, but I missed my home of soft spoken birdlike brown women and men who know how to preen and bow. I missed the flash of underskirts and colored costumes at the market. I missed mango and chile and salt. I missed the mournful mariachis in zocalos where no English was spoken. I missed the morning markets of hot maize drinks and pozole that sent sweat down my chest in rivulets. Eliot perked his sloppy ears as I sang him a Spanish love song. It was on the top forty of every radio station south of the border, and it had a haunting and lonely quality.

I ran out of the words, and hummed instead. As we walked, I found wild garlic and chamomile by the edge of the field. There was a large blackberry bramble that still had plump uneaten berries. A stand of volunteer cilantro had gone to seed and the hard pods and lacey flower remnants remained. Just as it got too dark to see, I found a spring in the corner of the field that smelled of peppermint and chives. I would return in the morning light to see what else grew in the soft and damp ground. A barn owl called its lonely call and I saw a flash of white leave a sycamore tree that was at least 100 feet tall.  A loud cry like a wounded animal whimpering came across the field from the animal refuge. I shuddered, and holding Elliot’s collar tightly, we went inside the empty house.

I slept the first night on a pile of blankets atop varnished floorboards that were at least 200 years old. I used folded towels and sweaters for my pillow and Elliot laid his head next to mine. Even in the slight summer breeze, the house creaked and moaned, and the sounds were broken only by Elliot’s whimpers. I am pretty sure he chased the doves.

In the morning ,the movers were on time and brought coffee. Splitting one household into two leaves remarkably little at the end of it; there were some cupboards, beds, tables and a ghastly amount of kitchen equipment. They were gone long before lunch and Elliot and I spent the rest of the day assembling the kitchen. While I know Elliot was ‘just a dog,’ it still seemed like he understood everything I said. He would raise one eyebrow, all the while, looking knowingly at me.

“Really, if I had opposable thumbs I would be so happy to help you assemble the stainless steel shelving. Just so difficult with paws, don’t you know.”

My Elliot had an English accent, just like Mr. Darcy.

“Come to think of it, the shelving would be so much better in this corner, don’t you think?” He turned his head to the side and pranced in the spot I was supposed to move it to.

“Right. Just splendid. Shall we go for a stroll?”

In retrospect Elliot was, as I tell my daughters now, the dog of a lifetime. That one dog that you love so much your heart breaks when they go. In my memories of Elliot, he is always talking to me. Saying the words I wish I had heard a two legged person say even once. To Elliot, I was perfect.  He loved me unconditionally, and listened without judgment. He was, in retrospect, one of the  true loves of my life.

I found a box, packed from my former pantry that held oils, pasta, rice, vinegars, spices and best of all some alcohol. That night we made pasta with Amatriciana sauce and ate it together looking out over the farm. The sycamore tree where the barn owl lived, lit up like magic with the light of ten thousand fireflies at dusk. I have never seen that many fireflies in one place since.

Two years later I would bury my best friend under that tree.

But I didn’t know that yet, and my world still held endless possibilities. 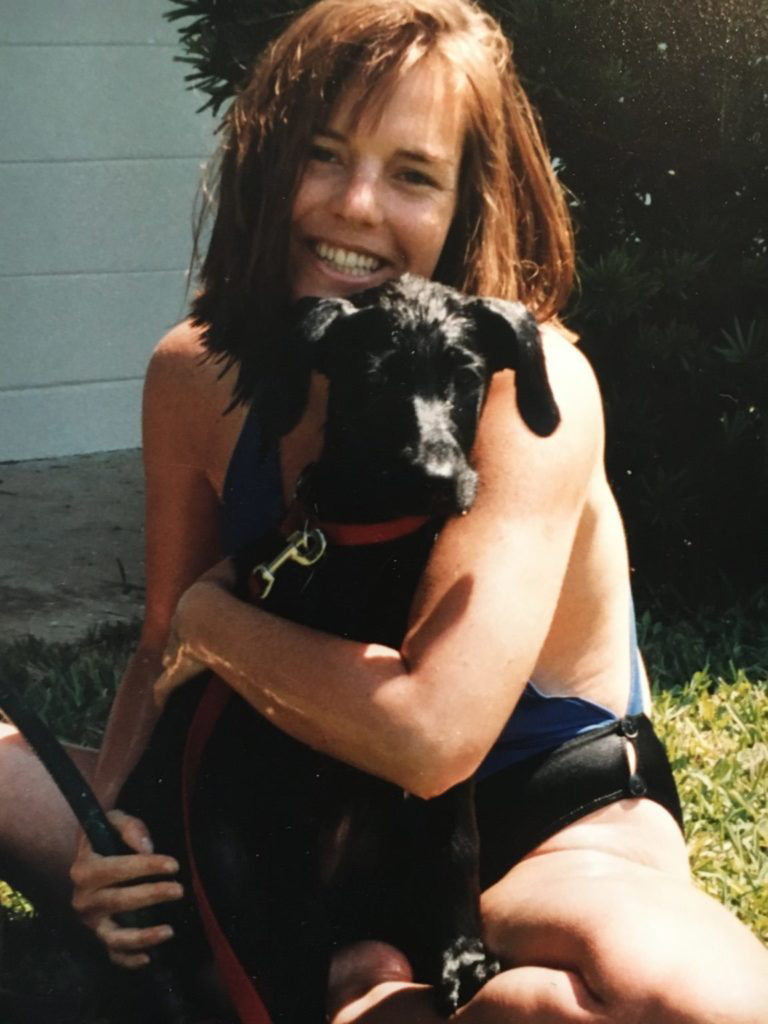 One lb pasta (I like a long thin noodle)

To easily skin the paste tomatoes cut an X in the stem end and bring a large pot of water to boil. Drop the tomatoes into boiling water for two minutes (+) and then plunge into an ice bath. Skins will slip off easily.

To easily peel whole garlic heads cut the stem end off and place in a covered casserole dish with olive oil to cover the bottom. Put in oven at 350 for at least thirty minutes and garlic cloves will slip right out when you squeeze the top.

In heavy pot put wine and vinegar in and bring to a low boil. You are going to reduce to approximately ¼ of the previous volume so keep a very close eye on it.

In a separate pot heat remaining olive oil and sautee onion until caramelized then cut tomatoes into chunks and add to pot. When reduced and thickening add diced herbs, spices, garlic and wine reduction. Start another pot of water boiling for noodles. Cook sauce for at least another half hour, adding water if beginning to stick.  Toss noodles and sauce.