This is a guest post from my dear friend Kristen Homan. She is a fiery hot ball of fun and great food. Make sure you try some of these awesome DOUGH ROLLER recipes. You will love the blueberry raviolis- they are sexy as AF!

I had hell of a week.

My load won’t be getting lighter anytime soon and that’s okay. I find relief in my kitchen.

I theorize that baking (or dough) gives me respite and forces calm upon my monkey mind. Ha! The universe heard my boasting and LOL’d then threw me one more pin to juggle – so I got to work making plain ol’ fashioned raviolis and hushed the dialogue in my head. I was so wrapped up in me and circumstances beyond my control that I went into auto pilot and took out imaginary and real problems on a bowl of flour and some eggs (which i will get to) and by the time I was calmer and back to focus, I realized I had forgotten to take pictures. I tell you what though, that was some James Beard/Michelin starred dough – Gordon Ramsey showed up at my door and said “F me – why didn’t you ring that you were fancying some ravioli tonight?”

Dough is therapeutic. It was that night. I digress and apologies that I didn’t include the well of flour… 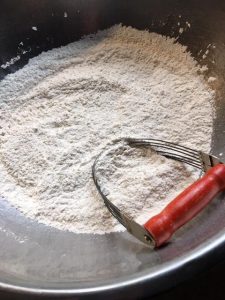 The recipe I am adapting calls for 2 eggs. I read theory and science and read and watched tutorials on the best ravioli dough (note: this is ravioli dough – not pasta dough) and settled on this which in my novice opinion is the easiest fat/gluten/salt/oil ratio and also is great for beginners and 11 year old Blue ribbon winners.

Put the flour in a volcano shape… 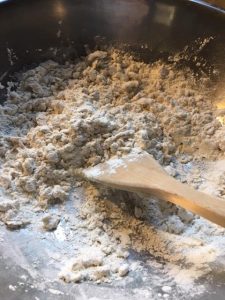 Pour liquids into center of flour well and fold volcano walls towards wet center. Mix will be sticky and crumbly and you may want to give up. Keep incorporating and turning – I used my hands – until the mix came together and it wasn’t sticking to me and was fairly smooth – not pizza dough smooth but looked a little bit like a brain with cracks and crevices. On a lightly floured surface with some flour as reserve…knead dough and fold it back and forth and up and down – using the palms of your hands and work it, flip it and reverse it…knead dough for about 5-7 minutes or so. It’s some food science we can’t see but we’re conditioning the dough and just bossing it around…good dough is so awesome and forgiving…

Different theories I read say to rest (the dough not you) either under a damp towel, a hot towel, a moist towel or plastic wrap so it won’t dry out before you’re ready to roll. I opted for plastic wrap and left it for about 15-20 mins. 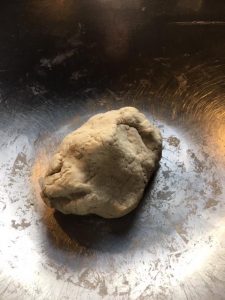 While my paparazzi free dough was resting – I made the filling. Ah – fillings galore! So many options available but I stuck with almost tried and true cheesy goodness. In a medium sized bowl: 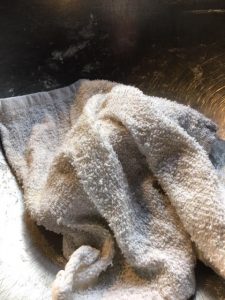 1 – 1 1/2 C Italian blended cheese – I cheated since on hand I had a great pre-shredded blend of Mozzarella, Provolone and Asiago cheese) everyone has a theory on great cheesy goodness and use what you like but you should have a mix of hard and soft cheeses and one that bites a bit…(think Sharp cheese like)

Mix all ingredients well. Move bowl to the side.

Ok – so dough has rested and looks less like a brain and is smooth-ish. Divide dough into workable portions. I cut mine into thirds and what I didn’t use immediately – I put back in the plastic wrap. 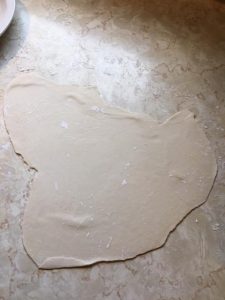 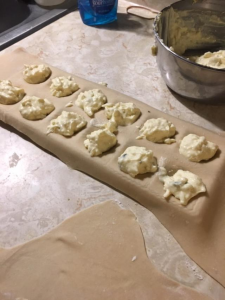 Fill dough pockets with cheesy goodness and cover with other dough rectangle. 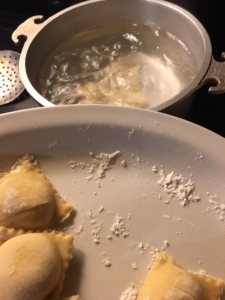 Once pockets of wonder and delight are shaped – I put mine in the fridge just for a few minutes while I brought a pot of water to a boil (also unsalted) and then placed 3 or 4 at a time to cook. They do sink and may stick to the bottom of the pot so give them gentle nudges with a spoon and keep them rolling – when they begin to float they’re done but I chose to let mine simmer another 30secs to a minute. Pasta will continue to cook after it’s removed from water for a short while so we don’t want them to boil too hard and then cheese oozes from sides but not boil and the corners of the raviolis taste like a wet wash cloth. 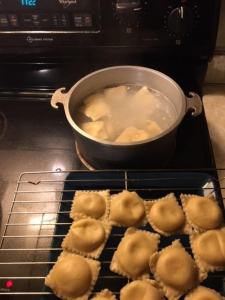 I removed these lovelies with a slotted spoon. I did not dump and drain as I would with a grocery store commercial brand because they’re delicate. Commercial raviolis are built tough – they’re like Roller Derby Raviolis – they can withstand packaging and shipping with partial though and re-freeze…I did reserve a bit of pasta water to keep them slippery while they were in the fridge until the next day when I planned to eat them. 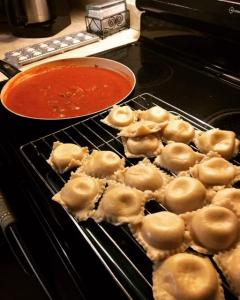 Who says what if…you made sweet berry pierogis 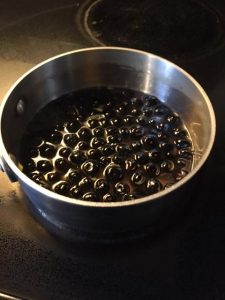 In medium sauce pan – combine all ingredients and bring to a simmer over medium heat until berries are soft. Approximately – 8-10 minutes. Don’t leave the stove…stir as necessary. Remove from heat and cool. Transfer mixture to a blender or immersion blender and blend…divide puree to two measurements – 1/2 c and 1/4 c – and what is leftover…hang onto anyway…set aside. 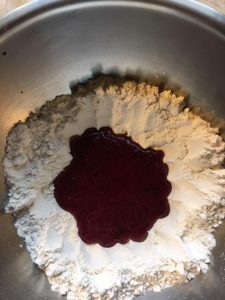 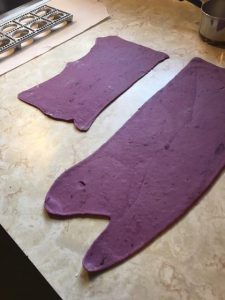 In a large-ish bowl put flour and make a well in the center. Add olive oil and puree and mix to combine mix well and then turn it with whatever you have available, Turn out (say whaaaa!) onto a lightly floured work surface and knead until smooth. Wrap in a warm damp cloth and sit (you and the dough) for about 15-20mins. 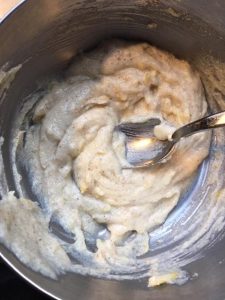 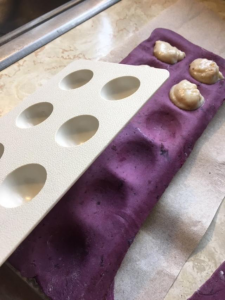 In a small bowl – mix and combine until incorporated then set aside.

Return to the dough.

Try to fashion that into a rectangle and lay gently onto ravioli pan and press into ravioli press. If no tools are readily available – there are many options – you can use your hands and a fork to crimp the edges. 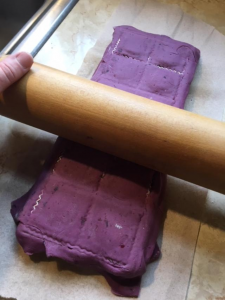 Spoon small amounts of lemony cheesy delight into the ravioli pan – cover with another thin sheet of purple doughy goodness.

Press seams with your fingers into ridges roll rolling pin over edges if necessary and gently turn pan to release ravioli. Some may split but just push the goo back in and crimp. It may explode while cooking but all cookers can eat their mistakes. 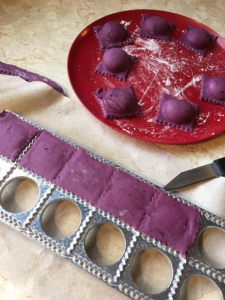 Now, I differ here in my opinion to other websites. I have bossed this dough for almost an hour at this point and I am tired and so is the dough. I put it in the fridge to chillax…just 10-15 minutes and I did too.  Then I began a large-ish pot of water to rolling boil (no salt) and I put these purple beauties in until they fit comfortably but not crowded and boiled until they floated about 7-9 mins +/- 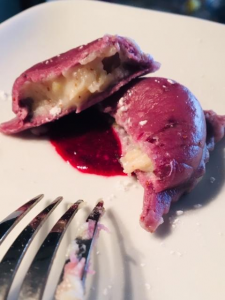 Remove goodies with a slotted spoon and drain off excess H20. Serve with remaining blueberry puree and touch of lemon zest and powdered sugar if you like… 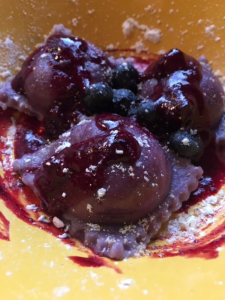