I have always hated my birthday. Not just hated, loathed, with a deep visceral anathema that is far more complicated than sheer vanity. And before you even ask, no, it is not obscenely old and I don’t look too much off what you would probably guess if you were being kind. I don’t hail from an age where a lady never said how old she was, or only appeared in the paper three times in her life. Not even close, I am a child of a Baby Boomer and hail from the beginning of GenX. While I don’t think of myself as middle aged, I am closer than not. I loathe my birthday because with every age in a woman’s life comes new expectations of behavioral norms that I refuse to follow.

People tell me I look years younger than I am. I work out daily, eat a lot of leafy greens, take care of my skin, and am not above some Botox sprinkles or a really good laser peel.  I sleep a good eight and don’t go on too many benders. Plus, let’s be clear, I have benefited hugely from my genes. I am naturally athletic and have ridiculously good cheekbones. I am one of those women whose age could easily span from thirty nine to sixty five, and I never tell anyone which end of the spectrum I am closer to.

When I was a child (roughly defined as anything before 25) I was in a desperate rush to find out what all the fuss was about. I learned to read at two, cook at two and a half, cook professionally at twelve, skipped three grades, graduated early, got married early and was just in a hell-fired damned rush to get it all over and done with.  The problem lay in the fact that I didn’t do any of it right and I had to do it all over several times. By the time I had reached 25 I was already on my second or third helping of everything, including marriages. I remember thinking what a loser I was because I had spent a quarter century failing at literally everything I started. In retrospect I had little understanding of what ‘failure’ actually meant. 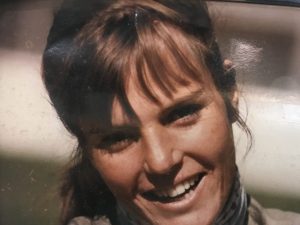 It’s amazing the perspective a couple decades can have on failure. Am I? Yes, definitely I am a failure in more categories than not. But one thing I truly excelled at is learning that I must live as if it didn’t matter. As if ‘failure’ was just another, more circuitous, path to growth. I had my last baby when many of my peers were becoming grandparents. I got another degree when my children were graduating high school. I have retired and started working again so many times I have almost lost count and only recently started yet another career. I think the real reason I have done away with the age my passport insists I am, is that when you are my age people don’t normally decide to begin again.  I am simply not going to let some societal definition about when I have to stop relentlessly making myself over define the second half of my very grand life experiment. I’m really not sure yet who I am going to be when I grow up, and I am not going to let someone else’s calendar tell me it is too late to figure it out.

I spent decades as a chef, a profession that is populated by people a third of my age. Yet, I still didn’t tell the little children in my kitchen how many more years of experience I had when they wouldn’t listen. The minute I ever told any of my employees my age I would automatically become OLD. Not a respectful “here let me lift that for you,” old, but a “Holy FUCK how are you still doing this,” OLD. I could run circles around many of them physically, but even if I were frail, the amount that I know about food is encyclopedic. You couldn’t get that knowledge in a decade or even two, so why am I self-conscious about doing it for so long? While the physical stamina required of being a nightly line chef has not been kind to either my knees or my marriages, my profession has been enhanced by my years of experience. The sad reality is that women have a ‘life expectancy’ in my profession as in many others and I refuse to let a number tell me when I am too old to do what I do.  The question of my last decade has been, will I bow to ageism, or just not tell anyone how old I actually am? 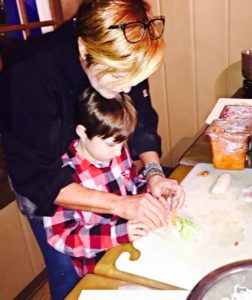 Needless to say I have always chosen the latter.

I have been the oldest mother in my youngest child’s class every single year since preschool, but I have also always been the “fun mom” who takes my kids on the adventures the younger moms neither  have time for, nor have grown bold or careless enough to attempt. I’m the one who will decide last minute that to properly experience the total eclipse, we simply must drive 12 hours to be within the swath of totality. I will be the one to take my daughter out of school for a week after the first snowfall to learn how to ski. I am the mom who says let’s go parasailing in a thunderstorm or jump out of a perfectly good airplane for your eighteenth birthday. My children are well aware of my proclivity to run toward adventure rather than away from it. At this point in our relationship they are infinitely more responsible than their mommy, so it’s a win-win all around. 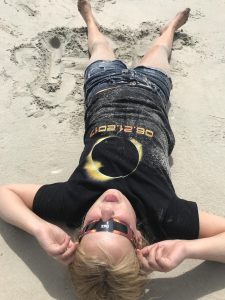 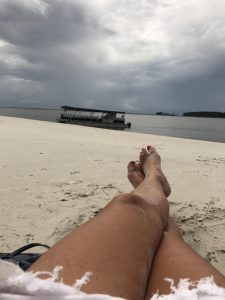 When I turned fifty, one of my childhood sweethearts called me to wish me happy birthday.

“Not so thrilled to be middle-aged,” I admitted.

“Then what is sixty?”

“The new thirty, babe, we get to sow our wild oats all over again with very few consequences that will lead to diapers.” 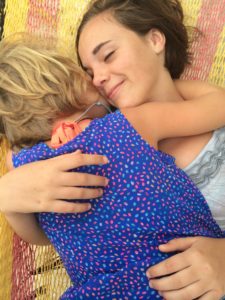 (see above for consequences that led to diapers)

I thought about that for a long time and realized that I had been on a path to reverse aging for a long time. Maybe my knees don’t know that I am getting younger, but I have refused to let my age define how I am supposed to behave as a mother, as a chef, as a writer, and most importantly as a woman. I’ll be damned if I will be told when to stop wearing a bikini or that it is time to get rid of my belly button ring. I will not let a number define my sexuality, or the energy with which I embrace my love life. I won’t listen to the list of things I am supposed to feel (or not supposed to feel) as I enter into my golden years. I’m pretty sure that the more we are told that as women we are supposed to stop being physically desirous and desirable beings post childbirth years, the more that is a self fulfilling prophecy. If a doctor told you that post fifty were the best years of your life sexually would you act as if they were? It is far more likely that you have been told that your desire and enthusiasm will decrease. I choose to believe that my physical expression of love and passion will continue unabated for as long as I want it to, and isn’t that what those little blue pills were invented for? So he can keep up? 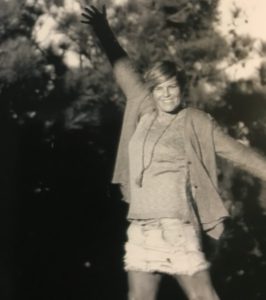 Being told how we are supposed to feel and react at this age is almost worse than rushing the experience. I was in a rush during the first half of my life to swim to the deep end, but now that I’m here I certainly don’t want to cling to the safety of the life raft but to slide into the cool water far below the surface where no one ever goes. Maybe, just maybe, Robert Browning nailed it when he described it as “the last of life for which the first was made.” Maybe we will be the first female generation that can revel in being outside the first blush of youth and recognize that the prime of life is not when our complexion and body is flawless, but when our spirit and determination is at its most dauntless. Those scars on my belly were hard earned with three pregnancies and those laugh lines are a demonstrable sign of joy. We are the ones that can change perceptions on aging away from focus on what we look like, to owning with pride who we are inside. I’m a better person now than I was at twenty five and I am certain I will be a better person twenty five years from now. I refuse to give up trying to figure out what I am going to be when I grow up because quite simply I don’t have to accept that being ‘middle-aged’ means being ‘done.’ I refuse to give up diving off cliffs into the cool deep water where only the brave chicks dare to swim. If those waters are dangerous then I’ll be damned if I won’t learn to swim with the sharks. 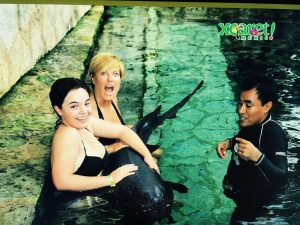 There is not a doubt in my mind I will still be wearing a bikini and sporting a really cute little belly button ring. 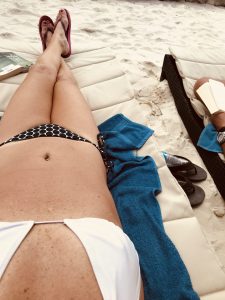 Cheers to us ladies.Hope to see you all Thursday.